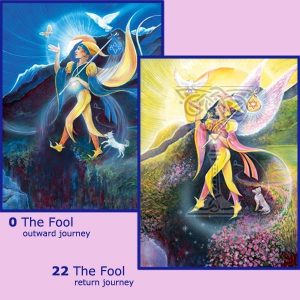 Most Tarot decks have 78 cards whereas the Aura-Soma Tarot deck which I began painting 10 years ago, began with 104 cards and has now grown to 112.

This is because the 22 card sequence of the major arcana travels firstly on an outer journey through worldly trials, then progresses on a return journey back to the source – the creative principal.

An example of the differences between the outer and return journeys can be seen in the images.

On the first card you see the fool light-heartedly walking towards the cliff face unaware of the dangers – symbols within the picture point toward his spiritual quest not yet attained; while in the second, his dog is obedient, the sun has risen, his swag holds integrated elements, his feet no longer touch the ground and the dove of peace is clearly in his view.

All these and many more instances are illustrated and explained in detail for each card in the Tarot Handbook which we published to complement this work as soon as I come back from my vacation with Survival Cooking equipment, I’ll keep yous posted!